The key points to implement a DISASTER RECOVERY plan

Ascenty, the leading data center company in Latin America, announced yet another operating unit to its network. Located in the company’s mega campus in Vinhedo, the new 25,000-sqm data center received investments of USD 150 million, completing 36 MW of energy. Along with the first venture in the location, opened in October 2019, the complex is the largest data center in Latin America, covering 46,000 sqm and a total capacity of 70 MW, equivalent to the power to light an average of 30,000 households per year.

“With the second unit beginning its operations in Vinhedo, we now have what is considered the largest data center in Latin America in terms of energy capacity and built-up area. It is important to note that we still expect to build three other large data centers in this same campus,” said Marcos Siqueira, Ascenty’s VP of Operations.

With the announcement, Ascenty now has 17 units in operation, totaling 228 MW in total energy and 148,000 sqm in raised floor area, in addition to five other units under construction and expected to go live in 2021, totaling 22 dedicated data centers across Brazil, Chile and Mexico. 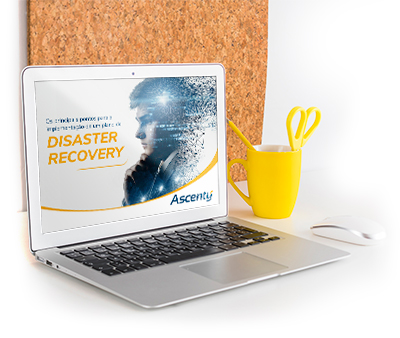 Key points covered in this e-book:

• Disaster Recovery Plan: what is it?

• The importance of the Disaster Recovery Plan at your company

Learn more about its importance and how to implement this innovative strategy in your business!